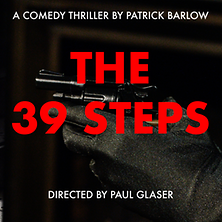 Trip to The Theatre

Last week we went to the English Theatre near the Mundsburg shopping centre to watch “39 Steps” and it was awesome.

The class met at school and we took the Bus 7 to Barmbek and then the U3 to Mundsburg. The theatre wasn't even 50 metres away from the subway station. As we walked in, there were many people and Miss Hadadi went to the box-office to buy our tickets. When we tried to find the Theatre room someone said it was on the third floor so we went up all the stairs but didn’t find it. Then a few people from our class looked at the house plan and there it was: ENGLISH THEATRE FIRST FLOOR.

Then, we walked down all the stairs again. When we found the entry to the Theatre every one of us stormed in and no one looked at their seat number but that was okay because we knew that we had the last two rows. As we waited patiently for the play to start, some of us went to the small shop in front of the entrance of the theatre room. It was cute and all but kinda expensive. As soon as the lights went out, we put our phones away, which we actually had to do because someone said it over the room speakers, and started watching. Only four people acted in the play but each of them played several roles which was very cool, because every time they had to play more than one role at the time they spun around and changed their hat to represent another character. Halfway through the play we had a thirty-minute break.

After all I can say that it was so funny to watch the play because we had so much to laugh about but the play also was thrilling and being there with the whole class made it so much better and funnier.

My conclusion is: go, ask your English teacher to go to the theatre with your class and watch “39 steps”.

But I would recommend it only to 8 graders or older because I think people under 8th grade wouldn't like that play because it is also a crime-story so that I think teachers wouldn't even let them watch “39 Steps”.